In July 2015 I joined a challenge that pushed me to give 40 Toastmasters speeches in one year (that’s a bit less than one per week). Part of the challenge was that I would make all of them public. It’s half-time now and here I deliver half of the material. In case you’d like to know why I’m doing this, I try to explain it in this post.

Links to all the speeches are below.

There was one thing I was always fighting: Uninspiredness. That I was supposed to write a presentation, a speech, a memo, but just didn’t know where to start. In the end I managed, but it took me so much time that I cursed myself for it. I mean – for being so uninventive, for taking so long and for taking the task to create anything in the first place.

I thought this was the way it had to be. Until I came across a chapter in Isaac Asimov’s autobiography. 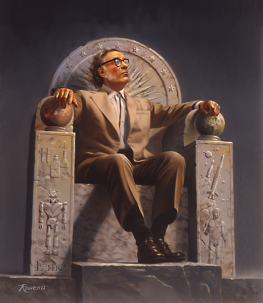 The title of the chapter was: “On Prolificity”

Doesn’t just the word prolific have a magical sound to it? Especially when you support it with some numbers. Wikipedia says: “Asimov was prolific and wrote or edited more than 500 books and an estimated 90,000 letters and postcards.”

As an incorrigible dreamer, I immediately imagined how it would sound in my autobiography some decades later:

But I had a problem. How could I ever be prolific, if whenever I would set to write anything – a speech, a blog post, even an email – it would take me terribly long to complete it?

What would Mr. Isaac have to say to that? I started actually reading the chapter and distilled 2 pieces of advice:

Number one: Think about writing all the time.

“I don’t write only when I’m writing. Whenever I’m away from my typewriter – eating, falling asleep, performing my ablutions – my mind keeps working. On occasion, I can hear bits of dialogue running trough my thoughts, or passages of exposition.”

First, I thought that it’s impossible to achieve if I’m not a full-time writer. But that’s not true. During my day, working as a project manager in IT, I’m facing myriad interesting situations, surprising interactions and I have conversations with quite many inspiring people. If I would manage to think about all those in a way “What could I learn from this – and share it with the world”, it would actually help me do my job better. So doing this WAS possible.

Number two: Don’t spend too much time on the writing

“The ordinary writer is always revising, always chopping and changing, always trying on different ways of expressing himself and, for all I know, never being entirely satisfied. That is certainly no way to be prolific.

A prolific writer, therefore has to have self-assurance. He can’t sit around doubting the quality of his writing. Rather, he has to love his own writing.”

I could certainly see myself in the description of the ordinary writer. Writing a blog post, I would first write a draft, then edit it, then send it to two or three friends to get their comments, then review the whole thing again. One or two days gone.

With the speeches I had an even bigger problem. I would spend the whole day staring at a blank Evernote screen, looking for the “perfect” topic, feeling that all my ideas suck. I ended up writing the speech last minute anyway, succeeding neither in using my time effectively, nor in delivering quality.

How to make it work

Think about it all the time and don’t spend too much time on it. Simple. But could I actually make it work?

Yes, but… I had to find a way how to make writing all the time and fast a MUST.

I joined the #100 Speech Challenge in MSD Prague Toastmasters club. The idea was simple – in a team of 3 people, we agreed to complete 100 speeches over 12 months: July 2015-June 2016. I committed to do 40. That was about one per week (allowing myself some holidays). That is writing all the time. On top of that, every speech above my 40 would help the team, allowing the others do a bit less.

Every opportunity to give a speech I wouldn’t seize would mean missing a chance to help my team.

All clear now. Now I MUST write. All the time. And fast.

In the beginning of January, it’s half-time. Part of the challenge was that I would make all the speeches public (a good motivation to avoid giving rubbish speeches, when you imagine anyone can look them up; even though in my opinion I have not succeeded at that completely :)).

In case you’d like to have a look – here’s the first 19, split into six categories.

I hope you’ll find at least one of them helpful. And if you ever feel uninspired: Just force yourself to write way more than you can handle. Trust me. You will find the way.

Note: I have recorded 20, but only 19 are public, as one of them I’ll need to re-record for public presentation. Reason – whiteboard in our office in the background – that had some stuff written on it 🙂

The storytelling manual makes us think differently about structuring our presentations. In my opinion, it should be the manual everyone does right after finishing the Competent Communicator. Especially for longer presentations, being able to tell a story is a key to keep audience’s attention. And it’s a brilliant tool to illustrate a point. Apart from that, making the stories up is a lot of fun.

II. If you’d like to learn a new skill

III. If you’d just like to get a few new ideas

Speech #4: I hate doing this

Speech #10: A Lesson from a Monastery

IV. If you’d like to see a non-standard speech

V. If you speak Czech

What can I say – despite the fact that I wanted to make sure all the speeches will be quality – those four I am really not happy with. But that’s why we are in Toastmasters, isn’t it? We allow ourselves to fail in order to learn.

Speech #3: How Not to Fall in Love with Toastmasters

That’s about it. Wish you luck in your writing / or any creative process you are going through.